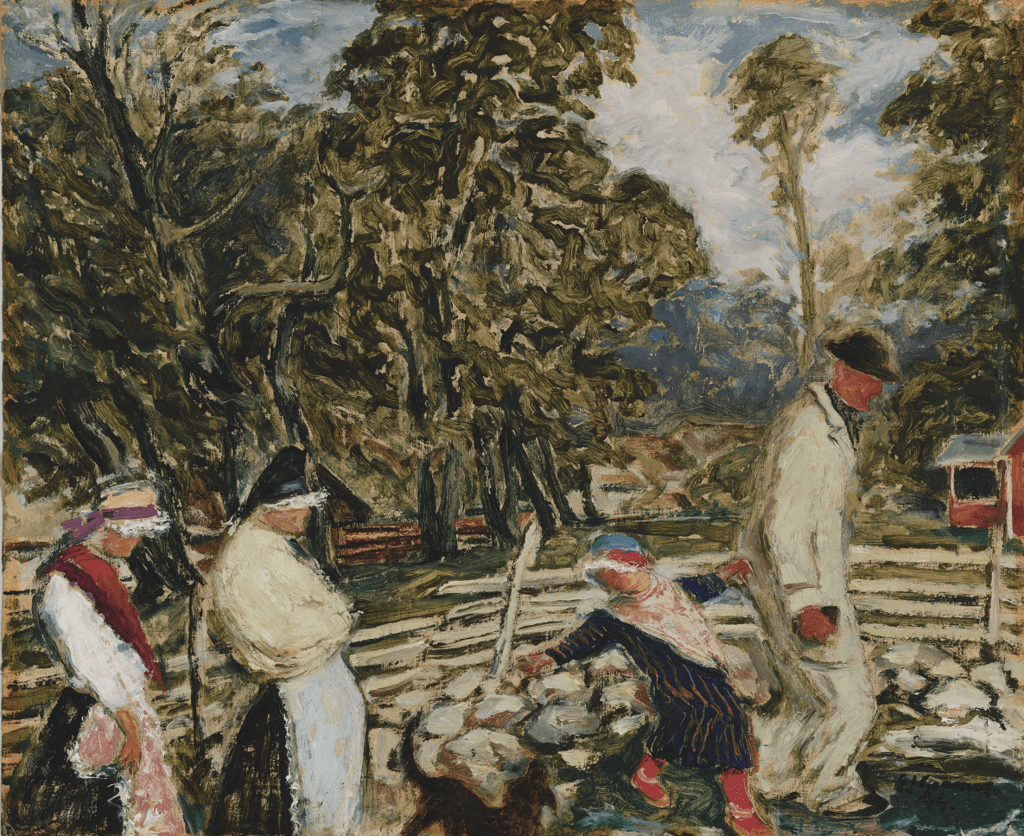 In May of 1944, it was written in the newspaper that ‘the artist Eerik Haamer from Saaremaa plans to spend the summer on Ruhnu Island, where he will be working on a series of new coastal and sea motifs’. Haamer’s return was reported in August of that same year and it was said that among everything else, Haamer had painted ‘typical Ruhnu islanders in folk costumes’. One month later, Haamer was already to flee from Estonia and this painting was completed according to memory in the Tynningö refugee camp in Sweden in the autumn of 1944.

Compared to his previous visits to Ruhnu, this one was different. The island’s population was shrinking. Whole families left by boat during that same summer. Reeli Kõiv, who is the most thorough authority on Eerik Haamer’s oeuvre, has highlighted that regardless of the depopulation of the island, the ongoing war, the bombardment of Tallinn (which Haamer experienced), and his family’s departure, that summer on Ruhnu was very inspiring and the artist painted in an altogether opposite frame of mind. While Ruhnu had previously provided him with existential and even harsh motifs, now Haamer painted dancing parties on summer evenings instead, or deep green landscapes. Haamer himself has said that Ruhnu evenings enchanted him, when ‘it was as if people melted away in the evening dusk and in the smoke vapours rising from unkaauks (triangular openings in the hip under the ridge of a roof)’.

Haamer had already used a similar means of depiction earlier – people in profile behind one another walking in a somewhat even anecdotal and yet demonstrative way – and used it later as well, for instance in a painting completed in 1951 depicting Ruhnu islanders on their way to church. The people in this painting as well are also quite probably heading to church, multicoloured folk costumes blending in with the natural surroundings – a happy moment amid great traumas. Incidentally, Haamer also depicted a Sunday mood later. He completed an altogether seven-part series entitled Sunday in the 1980s: large-scale paintings with an ironic undertone of people in relaxation.