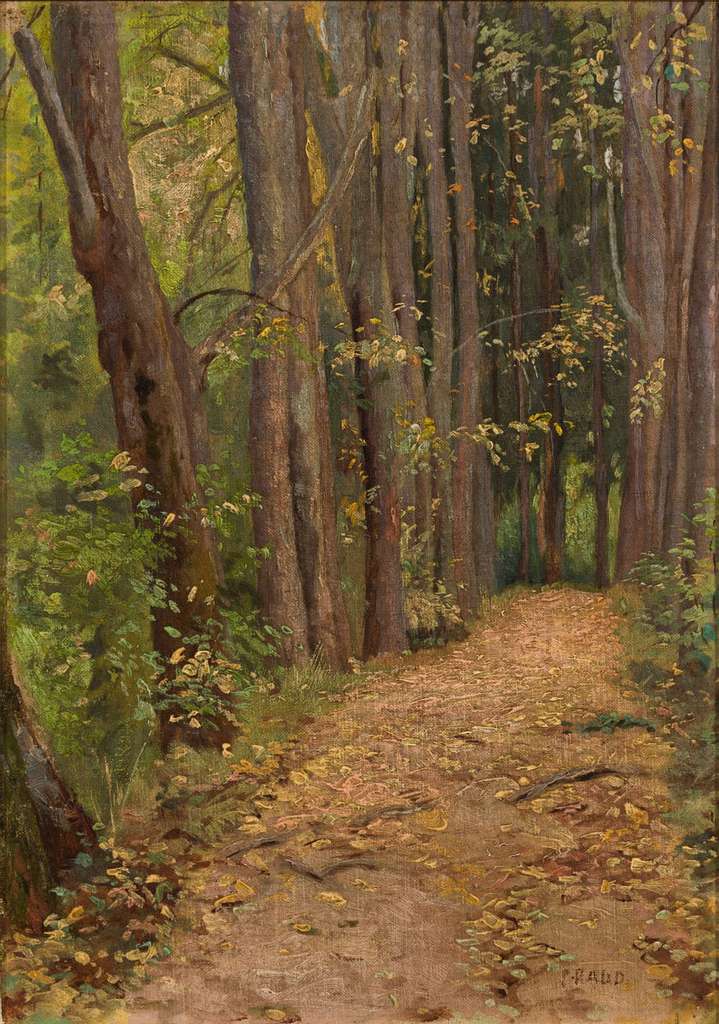 This little work has often aroused the most attention at exhibitions of Enn Kunila’s collection. Through some ultimately inexplicable force of attraction, it draws people to it and then shows them a somewhat mysterious dim park alley. Again, there is nothing glamorous in the view itself, but there is a whole series of clues here that do not allow us to consider the motif to have been selected entirely by chance. We could start with the tree trunks stretching up into the heights, a forest of vertical lines. If desired, parallels can be found for this in the art nouveau-like stretching of forms as well as from Estonian folklore, where the woods are often not a familiar place, but rather a foreign place. Man becomes insignificant in the woods and loses control over events since the might of the trees diminishes his importance. At the same time, we can ask why is there such a path leading into the depths of the picture. This is not an uncommon motif. Artists often use a path, a stream, or even the tracks of skis to form a ribbon disappearing into the distance as an element of composition. This makes the work three-dimensional, but it also poses the question of where that path leads to – a question that will continue to torment us as viewers of the painting, since it is impossible for us to go to the other end of the path as we look at the painting. This creates a situation of being cut off in a certain sense: we assume that the artist has created an illusion but evidently nevertheless knows where that road leads – and still for some reason, he has kept it secret from us. Paul Raud has admittedly closed off the horizon with a dense thicket, and it is as if the road ends on the surface of the painting. There is no mystery or continuation, but our reason refuses to believe it. The choice of colouring also stands out, where a golden path that seems to be covered with autumn leaves is placed between greenish brown trees. The impenetrability and darkness of the woods, however, stresses even more so the brightness and luminance of the path that is taking us somewhere (but where?).

Paul Raud frequently painted in nature, especially in summertime, also undertaking numerous painting excursions, for instance to the Pakri Islands, Muhu Island, in his home area around Rakvere, in Viru-Jaagupi, on the northern coast, and so on. He also travelled abroad, yet according to the recollections of the widow of Paul Raud’s twin brother Kristjan Raud, the landscapes there disappointed Paul since “the green tones of our Estonian landscape were reportedly completely missing there.”