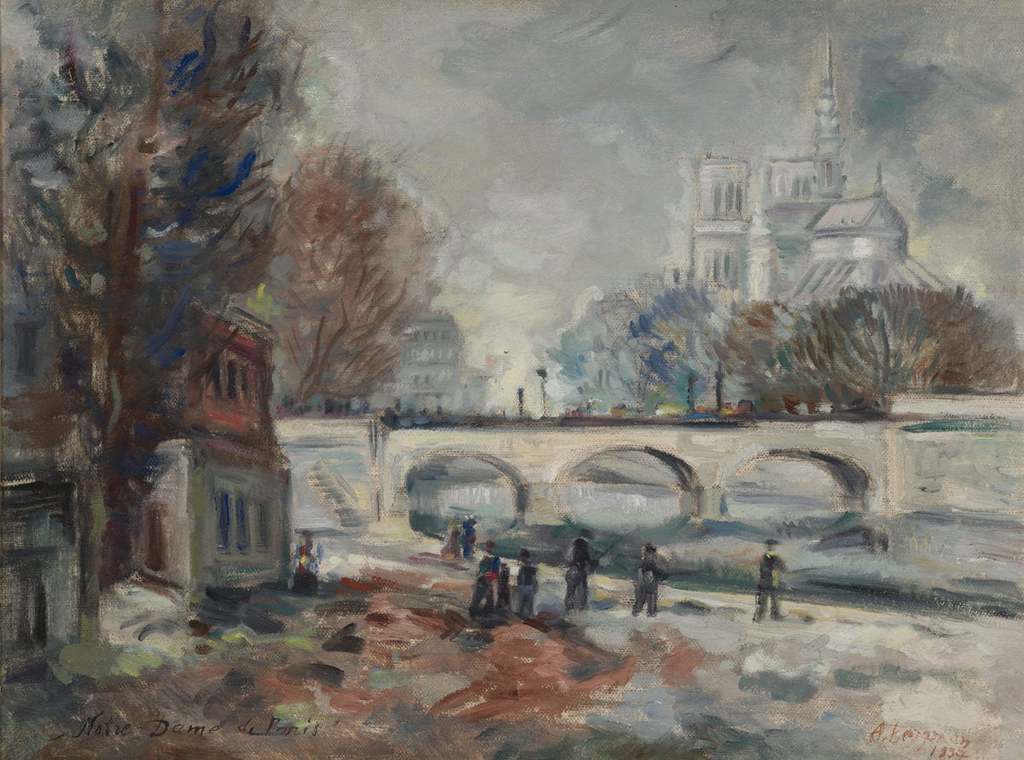 Aleksander Vardi was in Paris twice. He went there for the first time in 1925 and stayed for four years, and went the second time in 1937. His Paris views from his second period there are very well known in art history. The myriad shades of light and nuances of colour are highlighted. “Even the atmosphere in Paris was attractive – slightly foggy, intimate, embracing…Impressionism probably couldn’t have been born anywhere else,” is what Vardi himself has said.

Paris was a place for learning, living and working for very many Estonian artists. When an artist went there, then as a rule it was not for weeks but rather for months and years. At different times, artists such as Konrad Mägi, Nikolai

Triik, Jaan Koort, Aleksander Tassa, Erik Obermann, Eduard Wiiralt, Aleksander Vardi, Karl Pärismägi, Jaan Grünberg, Ado Vabbe and many others lived in Paris. The influences and examples of French art attracted them but also the city itself with its distinctive bohemian-poetic atmosphere. Incidentally, Vardi recalls how he listened to Aleksander Tassa’s impressions before travelling to Paris. “Tassa talked and talked, he was a kind of fantasiser…We got a colourful picture of what lay ahead for us and what Paris means for artists. In his elation, Tassa considered only those individuals to be artists who had been to Paris or were at least heading for Paris…”

Proceeding from reality and duplicating it to some extent can be both an opportunity and a danger for art. On the one hand, so-called real life provides abundant opportunities for depicting, interpreting, amplifying and diminishing – and so on. Yet on the other hand, the legitimate question might occur to the viewer that if we already have reality, why do we need realism anymore? Why copy what we already see anyway? Aleksander Vardi’s self as an artist had been shaped by the years he spent studying at the Pallas School, where the guiding principle was that the world is the friend of art – art does not have to withdraw from the world, rather it should interpret the world while at the same time seeking a place for expressing the artist’s subjective way of seeing and perceiving. The teaching at that school did not wish the radical reshaping of the world, or the building of an autonomous space that is maximally independent of reality. It proceeded more from accommodating concord and delightful harmony. Notre-Dame de Paris is the pictorial equivalent of that teaching. We see Paris, a city that for Vardi was more of a revelation than a modern urbanistic environment. Regardless of the fact that it was painted in the latter half of the 1930s, he has sought a timeless romantic motif where contemporary time is not reflected, and conveyed it through little impressionistic adaptations. Painting light always suited Vardi very well. Here as well he has succeeded in creating an illuminated core at the heart of the picture using minimal means, and that core radiates more broadly to the surface of the painting. Vardi does not wish to subject reality to his vision. He humbly accepts a position that leaves the artist the role of a subjective observer interpreting reality, reconciling us through art not with existential fears, but rather with contentment and quiet joy, which it is sometimes just as difficult to cope with as the darker side of life.