Landscape with a Windmill (double sided) 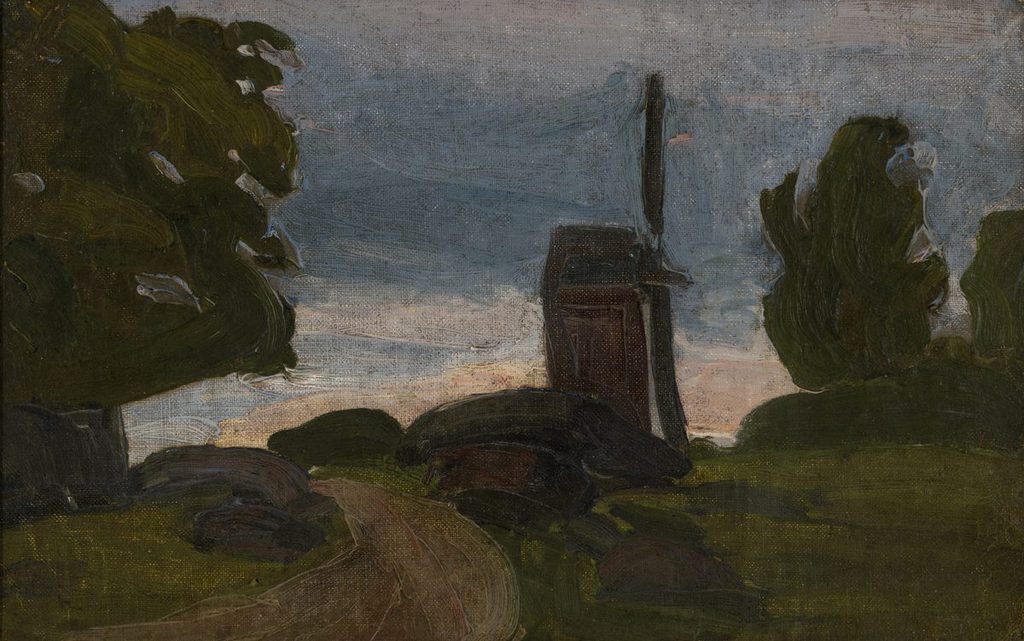 Nikolai Triik arrived in Åland for the summer of 1906. He was 22 years old and had studied painting in St. Petersburg as well as at Ants Laikmaa’s studio school. Triik painted numerous landscape views in small format in Åland – evidently due to a shortage of the necessary materials. The motifs here are highly stylised. In some cases, the artist has conveyed the entire landscape view with one or two brushstrokes. It is possible that he also had few paints at his disposal at that time, for which reason the colouring of Triik’s paintings is extremely limited and dark. Triik lived in Åland for about three months and due to his influence, Konrad Mägi, who had also arrived there, is said to have started working in the art of painting for the first time. They stayed together in the village of Önningeby, about five kilometres from Mariehamn, the capital of Åland. A summer colony of Nordic artists had functioned in Önningeby at the end of the 19th century. It is difficult to presume that they came into contact with artists from other countries, but this cannot be ruled out either. Since we know that other artists depicted Åland considerably more realistically, often being more interested in emotional views of nature, Triik’s paintings come across as being innovative and modernistic when viewed on the background of these other works. His brushstrokes were broad and thick, thereby conveying not so much the richly detailed beauty of Åland’s nature, but rather something archetypical, characteristic. Instead of exhibiting decorative and exotic external form, Triik has tried to remove everything that is superfluous and to find something that could be referred to as the nucleus or truth of a certain painterly situation.
Triik participated in several exhibitions in Estonia as well with works that he had completed in Åland, in this way introducing not only Åland to a public that was completely unfamiliar with art, but also – and even more – the language of modernistic painting.
There is also a work on the back side of the painting with the conditional title Ahvenamaa motiiv [Åland Motif]. Apparently his shortage of canvases forced Triik to paint on both sides, in order to make use of all possibilities.