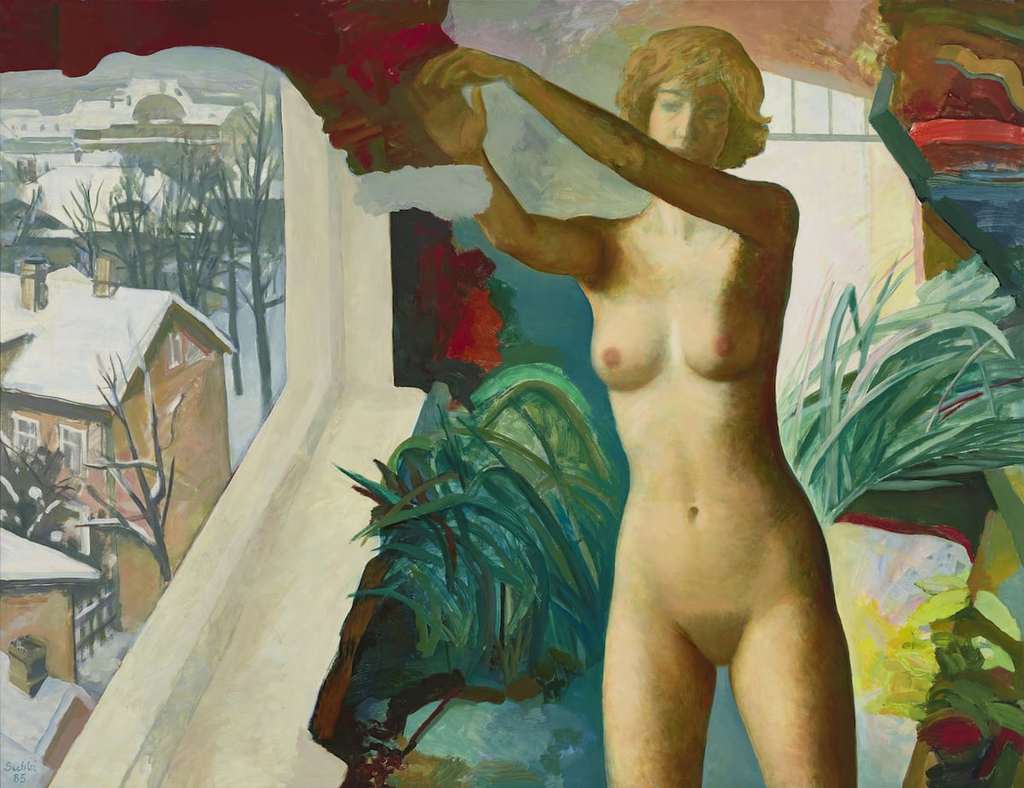 This painting also refers to Subbi’s studio, for the view from the window is the actual view from Liivalaia Street. Behind the wooden houses we see the stone building designed by the architect Burman, which also serves as a cultural reference: this building housed Ants Laikmaa’s studio school, one of the first Estonian-language art schools. The painting is divided into four zones. The first zone is the space outside the window: a real, objective urban space, as this was the actual view from Subbi’s window. The second zone is comprised of the body of the nude figure, which is both real (an actual model in the studio) and imaginary, as the unusual pose and abstract spatial context indicate that the artist was not interested in painting reality but in exercising his imagination. The third zone is the abstract backdrop to the nude figure, which is straightforward and lacks any allusions to the reality outside of the painting. The fantasy space, made up of a luminous window and stalks of grass, forms the fourth zone of dreamy details, which are realistic but appear as fragments outside of an actual context, thus creating a new parallel world. Therefore, the painting consists of four zones that relate to reality on different planes. By combining those zones Subbi showed that he was interested in a completely new and independent reality.

Like many other paintings from the period, this one also has a vertical rhythm: first comes the window frame and then the nude figure, which act as dividers to separate the surface of the painting into various spaces. Other visual determinants are the two windows, one realistic and the other dreamlike, which let in light and open up the interior. An extraordinary fact is that the view from the studio window shows a winter scene. This is surprising in terms of the logic of the painting itself (as green grass seems to allude to another season) as well as in relation to the artist’s oeuvre in general: Subbi’s landscapes show almost without exception summer and spring scenery, so winter landscapes are very rare in his work.