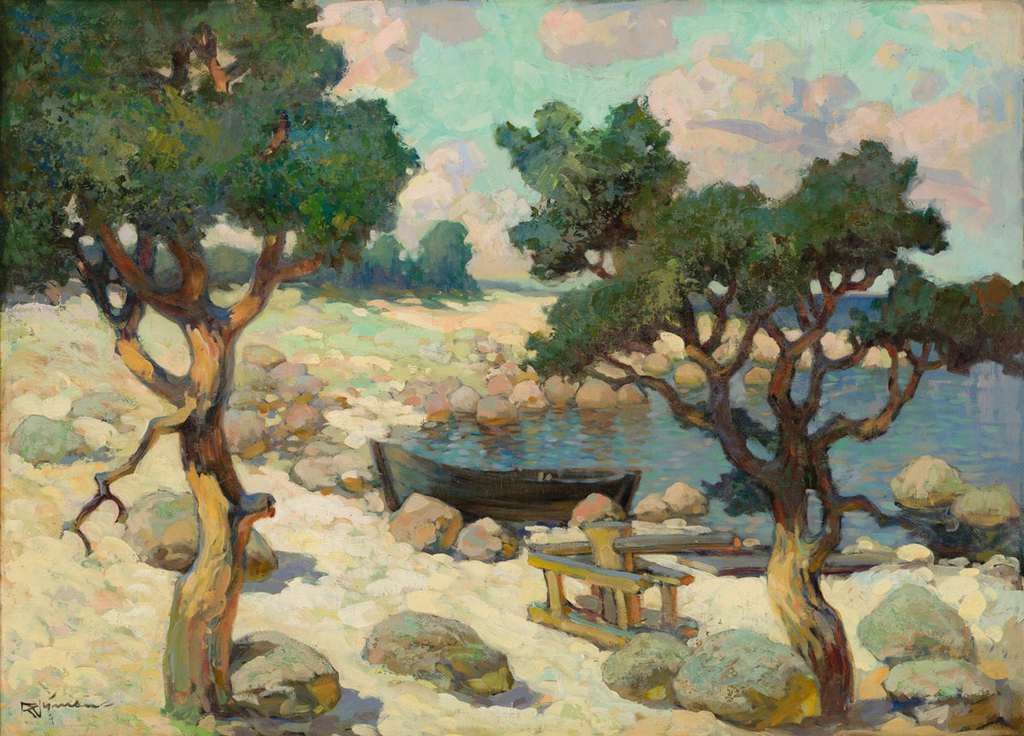 Roman Nyman’s painting is in some sense typical of Estonian art at the time of the Second World War, which turned its back on the present and often preferred to depict mythically idyllic scenes of the past. Nyman’s deserted landscape with a boat has no literary or symbolic connection whatsoever to the era in which it was painted. It is more a theatrical stage, where yearning for harmony, and freedom from conflict is enacted. So-called wings, or the pine trees at the right- and left-hand edges of the picture, between which the viewer’s gaze is directed to the stage bathed in light, are also indicative of the staged nature of the scene. The reason for this may be both Nyman’s connection to the theatre that had lasted for decades – he had designed stage sets in Estonia and abroad, and served as the long-time director of the stage decoration studio at the National Industrial Arts School – as well as the inevitability of the situation: the only way to depict harmony in the 1940s was to stage it. Nyman’s choice of colours also stands out, of course. In this work that was evidently painted on the northern coast, he has in his own way revived the yellowish tones enervated by the sun that were found in Spain and Italy in the 1920s, placing them in the Estonian beach landscape around twenty years later during grim times. Nyman had also not abandoned full-bodied yellow colouring in the intervening years either, but in this painting, it seems as if the entire canvas is literally drowning in it. The dramatic shadows painted beside the rocks that subdivide the surface of the painting stress that effect even more. In this way, painting becomes set decoration that is associated more with fantasies than reality.