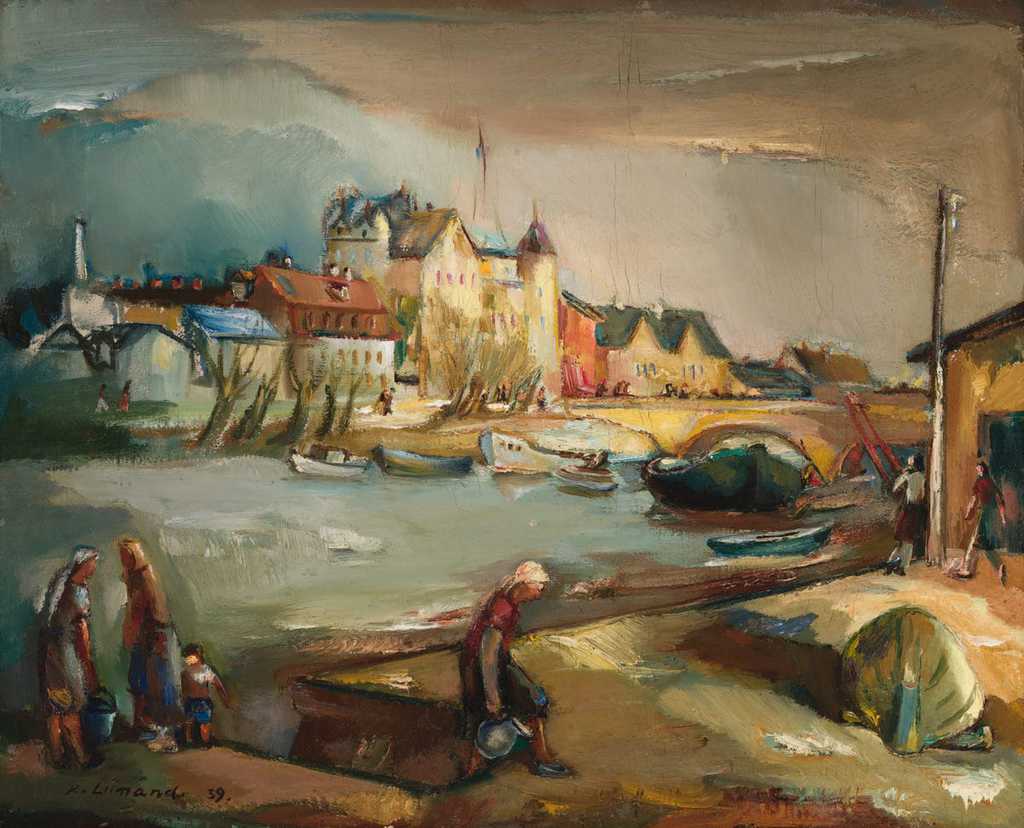 Tartu is Estonia’s second largest city and in the 1930’s, it was the centre of Estonia’s art life. The higher art school was located here and many artists lived in the city. Thus Tartu has also been depicted a great deal in older paintings. Tartu suffered a great deal of damage from bombardment and fires during the Second World War and the houses that Liimand depicts here in this painting have been destroyed by today. For this reason, this is a portrait of a lost city.

Kaarel Liimand’s talent lay in blending the everyday with the poetic. Along with numerous other critical artists from the 1930s, he often turned his gaze towards hardship, noticed situations and people who were at the lower levels of the social hierarchy and who did not have the strength or opportunities to extricate themselves from there. Here as well, the main character of the painting is a woman who carries heavy (her somewhat stooped, crooked pose indicates this) canisters filled with water. There are also other women waiting with pails, who in addition to fetching water from the river (but who fetches water from the river?) also have to keep an eye on the children with them. Nevertheless, this painting is not disconsolate. Very Kaarel Liimand-like thick, impasto colours make the cityscape a picturesque event, the primary attention of which is on light and colours, not on suffering people. Liimand creates an enormous patch of light at the right-hand side of the painting using yellowish tones, which also illuminates the posh houses of the bourgeoisie in the other side of the river (notice that the water bearers remain in the shadows outside of it). Pleasant boats and little ships of different types are lined up on the river, demonstrating their readiness and interesting forms. Liimand has also added romantic mystery to the painting in quite a few instances: we see a black door opening, arched openings beneath the bridge, and also stairs leading into the river, but we never see exactly where those doors, openings or stairs lead. Yet while Liimand has admittedly been subjective in his choice of colours and form in terms of objects with perceptible contours but still grounded in reality, for a moment it seems as if a somewhat different artist painted the water surface and the sky. The sky is painted peculiarly brown, the water surface greenish, and both are canopies – we do not see a single cloud or wavelet. They are large elements without recognisable objects, and their primary function appears to be not merely to serve beauty, but rather to stress openness and abstractness.