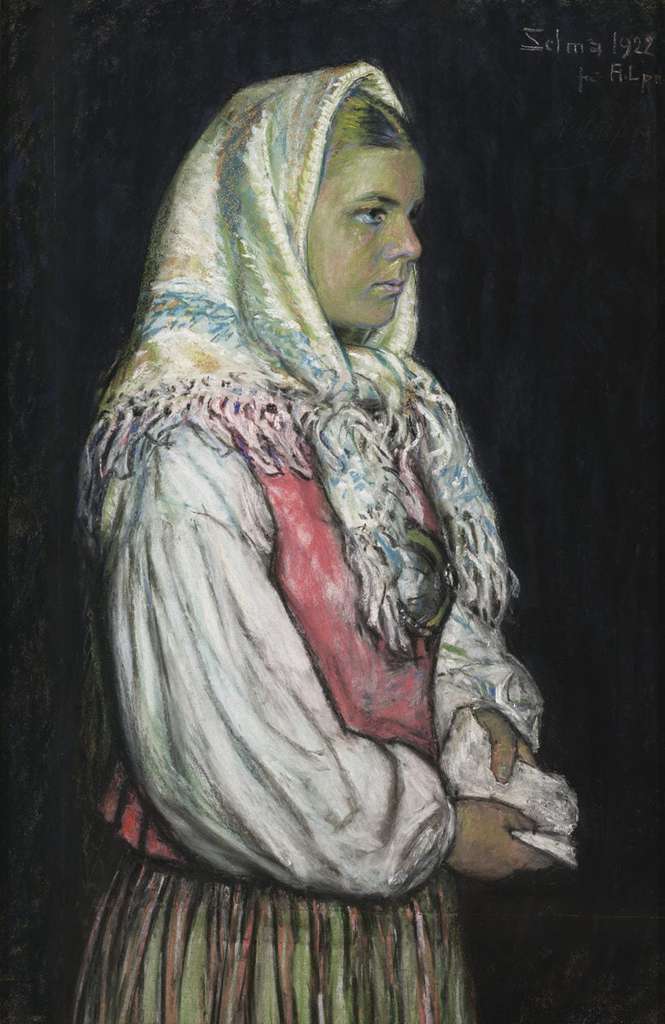 Laikmaa had already withdrawn somewhat from the art scene in 1922 when numerous intimate shades are introduced into his works. For instance, he paints a whole series of self-portraits during this period. Selma as well was apparently one of those works where as he painted it, Laikmaa felt (and sought) security, because referring to the model by her first name may indicate their acquaintance. The fact that she is wearing a folk costume typical of Laikmaa’s home neighbourhood, and the model’s simple and sincere attitude may indicate that Laikmaa did not have to exert himself in order to ingratiate himself with someone, and could instead paint freely. Laikmaa’s decision to paint the entire base surface black before starting to paint is a striking and bold solution because Selma’s folk costume is especially accentuated on the dark background. Laikmaa considered this to be important, evidently for both ethnographic and aesthetic reasons. He wanted both to show traditional clothing and to create a compelling association of colours. This was so important to him that at one point, he pasted a strip of paper to the bottom of the painting to allow him to paint another ten or so centimetres of her skirt. Prominent contours, which are very characteristic of Laikmaa, keep colour surfaces separate from one another and for this reason, the painting’s composition is strictly structured. When he reached the model’s face, Laikmaa decided – as is usually characteristic of Estonian portrait paintings – not to add drama, but rather to observe the subject in a tranquil state that is as neutral as possible, apparently believing that this is precisely how it is possible to get the closest to the "truth", to the "real" condition of a person. As a strange detail, Selma holds some kind of lump in her hands. Is it a handkerchief? Or a cloth? Or a letter instead? Why is she holding it? What did the artist want to tell us with that? If we look at the girl’s face without the mysterious object in her hands, she really does come across as being neutral, but if she is holding a letter or some other important thing, then this face instead reflects seriousness? Fright? Quiet joy? Shock? At one point the painting ended up in Finland and presumably was brought back to Estonia in connection with an exhibition that was held to commemorate the anniversary of Laikmaa’s birth in 1966, but the more precise history of the painting remains the same kind of mystery as the white object in the model’s hand.