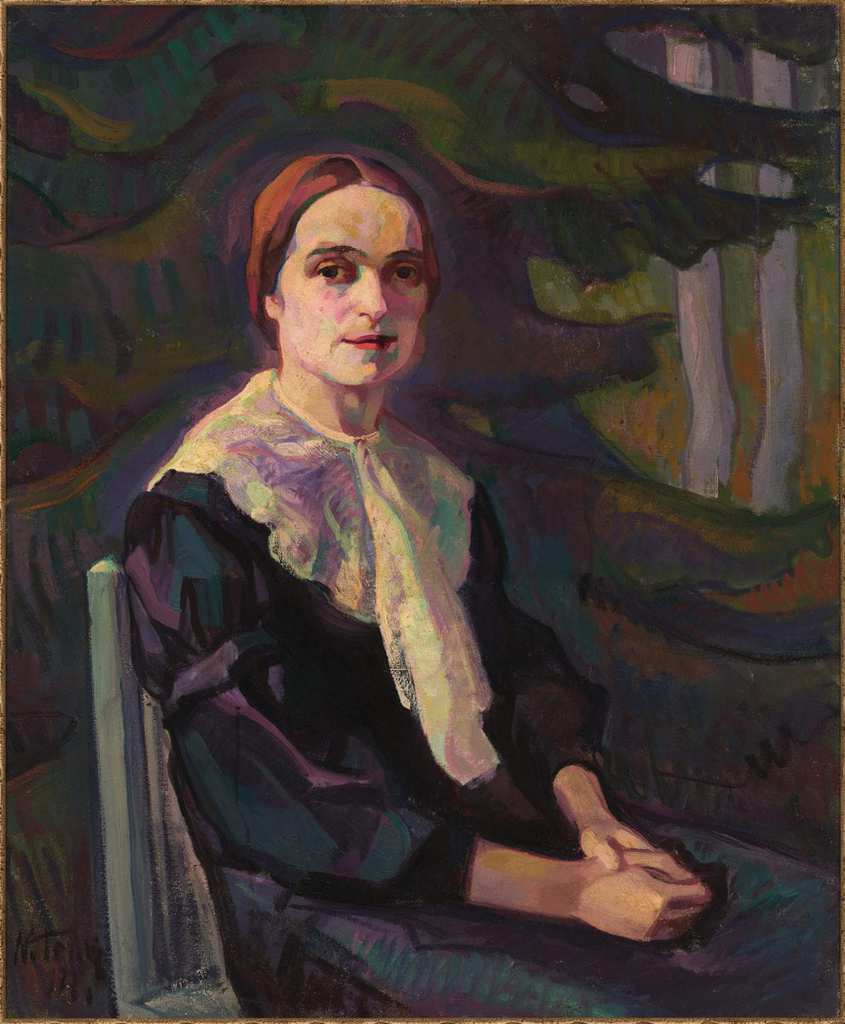 Aino Suits was Finnish and the wife of the writer Gustav Suits. Triik was a close personal friend of Gustav Suits and his creative partner: they had worked together in the Noor-Eesti (Young Estonia) grouping and Triik had illustrated Suits’s collections of poetry.

Aino and Gustav Suits got married in 1911. Three years later at the beginning of 1914, their first child was born, whereas Aino Suits could have almost died after giving birth due to a blood clot or thrombus that developed in her veins. By the summer of 1914 when this painting was completed, however, she had recovered considerably and lived at their home in Kilo, Finland. Even though her husband was abroad in July, she received the Triiks, who unexpectedly dropped in for a visit and hosted them for rather a long time. Among other things, Aino Suits wrote in her letters to Gustav:

We have conversed about painting my portrait as well. He is very precise in this in order to properly understand my personality. He even compared me to Mona Lisa, that it is as if am oberörd [a Swedish word meaning ‘unmoved’]. I participate in what takes place around me yet nothing throws me off balance – his opinion. I explained that I would gladly like to be the person he thinks me to be but I am not. He says that he sometimes sees my face as that of a “good, intelligent child”. That is interesting. He’s going to start painting. We’ll see how you like it.

Dear Gustav! The Triiks are here. The painting of my portrait is continuing session by session. He can say, for example: this has to be of a “darling child”, meaning of me. He respects me, he wants to understand me in order to paint a proper portrait. He is a very congenial person and somehow very familiar.

Dear Gustave!...The most peaceful moments for me are my sessions with Triik painting the portrait: it is interesting to chat with him. He has managed to put my thoughts into my appearance, sent thinking of you with love (that you know that), I thought of the future for the two of us. Triik painted and painted, his eyebrows furrowed and the picture became more and more the way I myself feel that I am. I felt like a different person during the session, as if I were in a different world. It was quite odd when the painting of the picture ended that day.

When Gustav Suits shortly arrived home and saw the painting, he wrote as the first lines of his next poem: ‘Seen still in late summer: / artist! Wife! Peace! Life! / The canvas spread out on the easel, / the half-finished portrait of my wife.’ Thus everyone describes both the painting process and the result as being calm and life affirming. In creating the portrait, Triik chose modest tones, altogether different from the colours of his Soome maastik [Finnish Landscape]. Triik painted a perplexing, unrealistic motif in the background, something in between a spruce tree and abstract wallpaper with an art nouveau flair. This creates an enigmatic and somewhat fantastic environment, yet the painting’s main character is still Aino Suits, in whose case Triik has lighted her face and hands. Aino Suits’s expression is calm and bold. She has turned her gaze straight towards the viewer. A large, white, airy scarf around her neck, in turn, emphasises her self-assurance, but also her symbolic purity and sincerity. Her hands placed in her lap also provide a calming accent, in which there appears to be no other wish than to affirm and come to terms with that which exists.

The fate of this portrait was dramatic. When the family moved to Estonia, they took it with them, but when Tartu was bombarded, the Suits home burned down in 1941. This painting was among the few things that were saved. Restorers have also discovered little traces of soot on it. They took the painting with them a few years later when they left Estonia and it hung in the home of the Suits’s in Sweden. The work returned to Estonia only a few years ago.