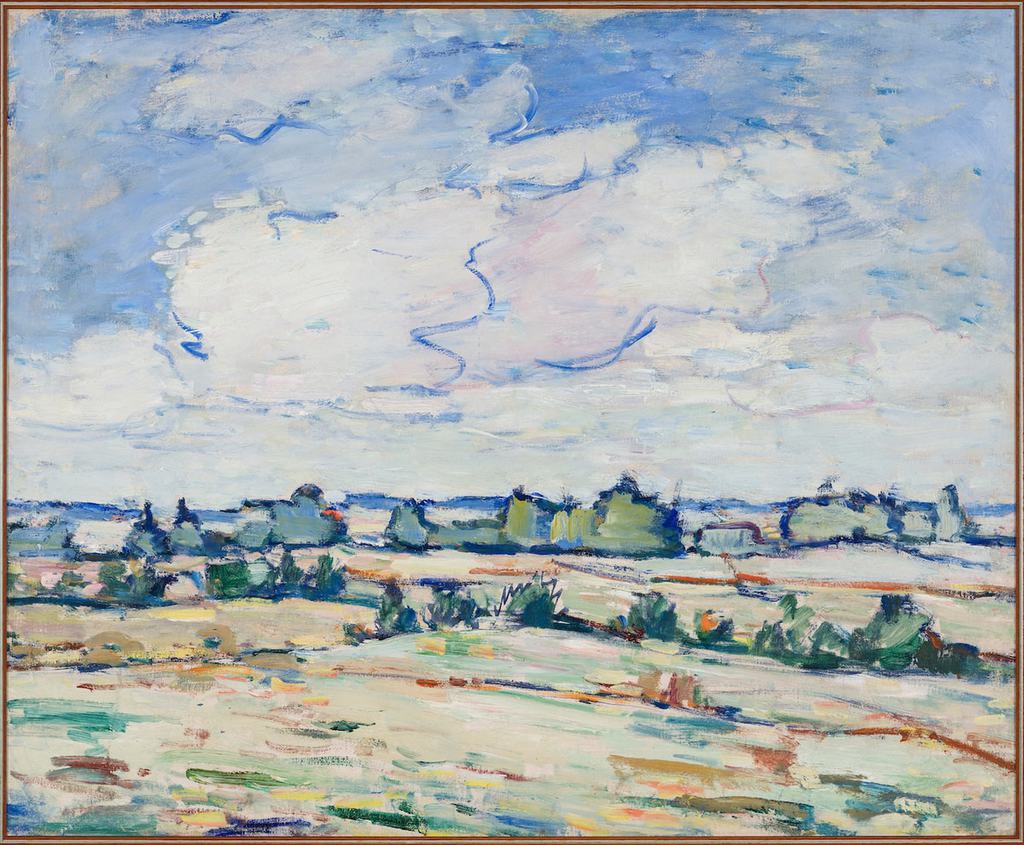 As far as is known, this is one of the last (surviving) paintings by Villem Ormisson, evidently depicting some place near Tartu. Ormisson’s close friend Jaan Vahtra writes in his memoirs, which were published after Ormisson’s death: ‘I often went with Ormisson to paint landscape studies on the shores of Lake Viljandi. I always had one and the same problem: I never found the appropriate motif right away, rather I had to spend a long time searching for it. Ormisson, however, found it quickly: he looked around a bit, sat down, set to work and in a half hour, his study was finished. Ormisson usually replied to my complaints as follows: “The motif isn’t important, what’s important is how it’s painted. Sometimes you can make a really terrific picture out of a lousy motif. Every thing, every motif in nature is beautiful – there’s nothing that’s ugly. But if you start looking for that most beautiful scene, you sometimes won’t find it at all. I’ve noticed that and that’s why I don’t even start bothering to look for motifs. You sit down somewhere – there are motifs all around, all over the place…”’
Vahtra also writes:
‘“Where did you find those clouds and that green grass in the rye stubble?” I asked, because the sky was altogether cloudless. “Nature’s motif needed to be supplemented. The blue sky would otherwise be bare and boring, similarly a pinch of grass here and there came in handy in the rye stubble. Nothing comes of copying nature – it’s impossible to copy nature. The main thing is that the picture turns out beautiful, and if something’s missing in nature’s composition, the picture has to be supplemented. If you look at it closely, my study is awful and rough, like ploughed land, but you see, isolated patches blend together in the distance and create a beautiful play of colours. And nobody can say that the study isn’t lifelike: everything that’s in nature is here as well, the question is only in how somebody sees it. Some people have more natural sense of colour, others have less. There where somebody sees something beautiful, somebody else simply doesn’t find anything.”’
And further:
‘When he set about painting, Ormisson almost never started out by using charcoal to draw, instead he started with colour right away, thereat barely marking out the model’s most characteristic boundary lines with light contours. When I once asked him why he draws so few contours, Ormisson replied: “There’s no use in drawing the picture in advance in detail when painting. Contour only interferes with painting. There are no boundary lines anywhere in nature, there are only colour contrasts and relations between single tones. If you start marking the difference between every colour and colour nuance with lines, such confusion will come out of it that you wouldn’t even be able to call it painting. You’d only be thrashing about in a maze of lines. You have to tell the difference between a drawing and a painting. A painting is a thing of feelings, a drawing is a product of reason. If you cling too much to the drawing aspect of an object, you can get a coloured drawing, but not a painting.”’