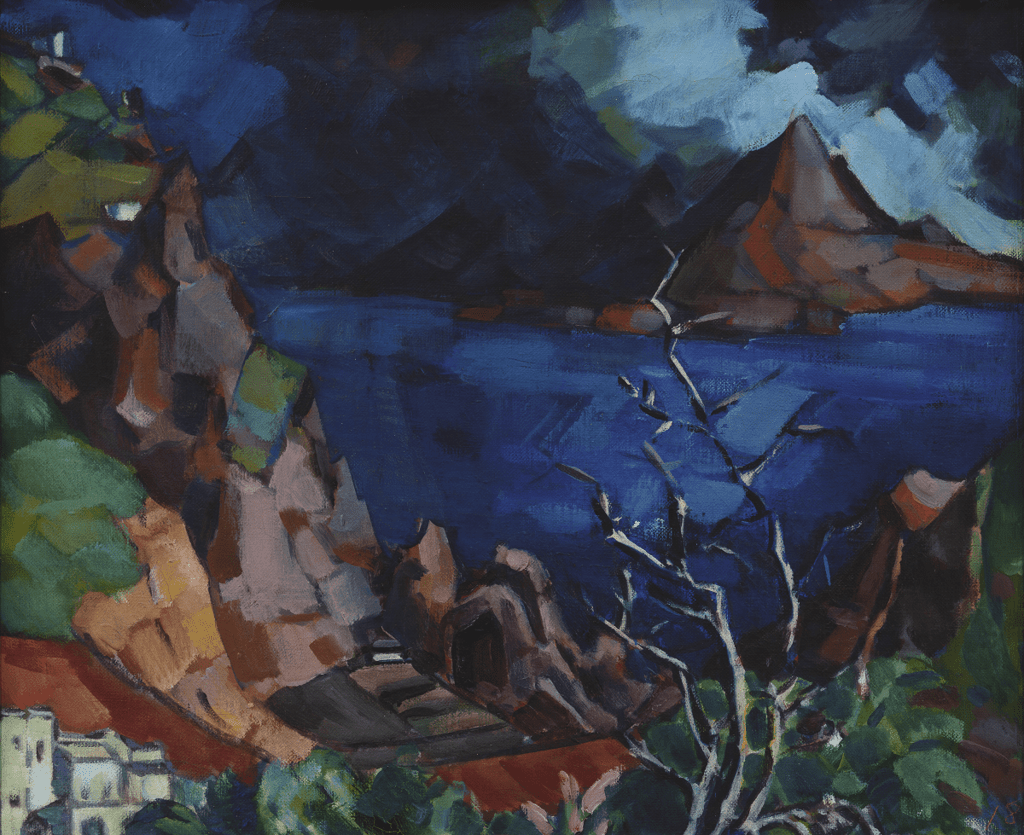 By now, almost a third of all known views of Capri painted by Konrad Mägi belong to Enn Kunila’s collection. This work was displayed at the memorial exhibition that was held in Tartu and Tallinn after Konrad Mägi’s death. Thereafter it had been part of a private collection for a long time.

Many of Mägi’s views of Capri draw inspiration from dusk or even night-time, which enabled the artist to stress romantic, emotional tones. This work as well focuses on the darkly blue sea, yet not only that. Mägi’s panoramic view of the world stands out: while many views of Capri are as if walled-up by a belt of houses, in this case the painting has a great deal of depth, the space opens up, and the viewer’s gaze extends into the distance. Mägi has also placed great emphasis on the composition. We see jagged cliffs first in the foreground on the picture’s left-hand side, yet a similar rhythm carries over to the cliffs in the distance. Mägi has thereby created balance between the painting’s left and right sides, which also helps to fortify the sky’s similar compositional structure composed of facets and jags. As a final nuance, Mägi has added to the composition a dried-up tree towering into the sky on the right side in the front. The tree’s somewhat deformed shape even further intensifies the overall powerful rhythmicity of the painting’s surface. Yet there is no reason to look for Cubism here, even though it had reared its head even in Estonian art at the start of the 1920s, since it is known that Mägi did not want to have anything to do with that innovative style.

As is typical of Konrad Mägi, the primary emphasis is nevertheless on colour. The cliff on the left side is composed of different patches of colour, where cold tones alternate with warm ones. Yet all in all, this patchwork quilt forms a certain contrast with the uniform blue of the surface of the sea. Thereby several centres are formed for the painting in terms of colouring: the sea together with the cliffs in the background is one focus with a relatively controlled overall tonality, while the variegated cliff in the foreground is rich in nuances (green tree groves, little houses, etc.) and even forms a peculiar kind of frame into which the entire landscape in the background seems to be placed.