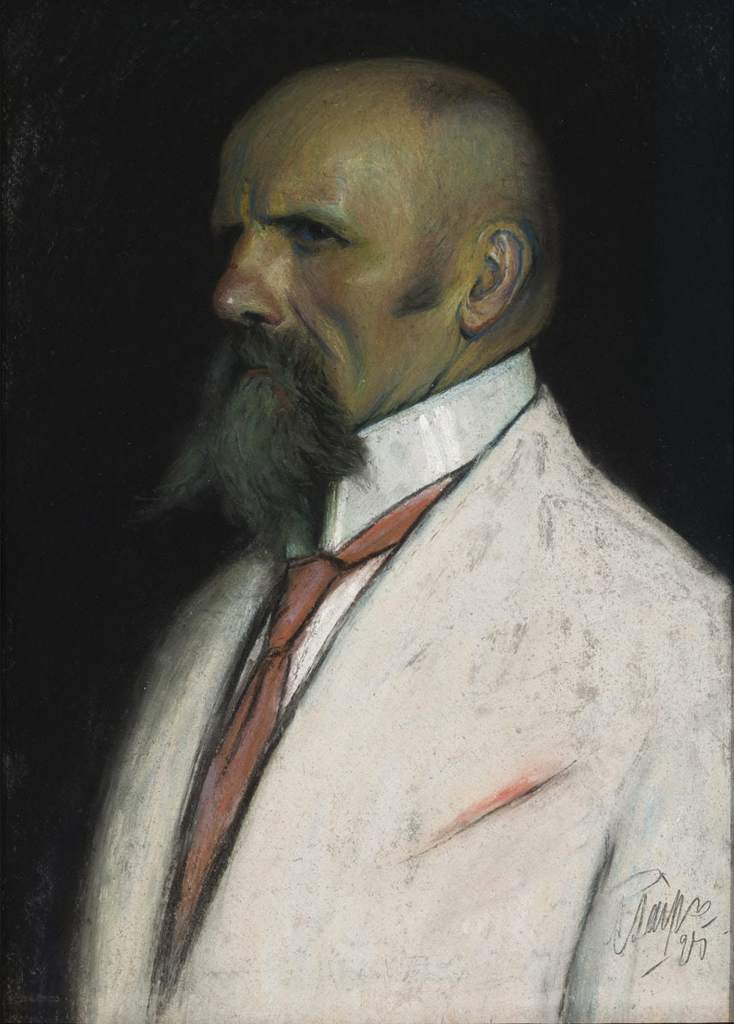 Of the artists who painted at the start of the 20th century, Ants Laikmaa was one of the most prolific creators of self-portraits. Time and again, Laikmaa returned to recording himself, providing the viewer with opportunities for numerous biographical, psychological, traumatic, imagological, etc. interpretations. Laikmaa painted self-portraits in practically all the decades of the 20th century, but the five self-portraits created in the first half of the 1920s come to the fore here as a particularly noteworthy batch, whereas no less than three of them were painted in 1925 – another two works in addition to this painting. Ants Laikmaa is 59 years old in these portraits, always impeccably dressed, but with a troubled expression. While Laikmaa had previously often looked the viewer straight in the eye in his self-portraits, in these three paintings he has turned his profile to us, yet we notice that it is as if he were peering at us out of the corner of his eye – partly cautiously, partly standoffishly. A state of being cut off can be perceived in all three of these self-portraits: although the artist has recorded himself in the same room where we are and although unlike most of the rest of humankind, we can look at him decades later as well, his attitude exudes a distanced, detached state, coolness, the feeling that he has been excluded – although the fact that he is peering at us bears witness as if he might nevertheless want to be part of what is around him but he simply cannot. This kind of psychological tension characterises all three works and is in keeping with Laikmaa’s works from the first half of the 1920s (the colouring becomes darker, depictions become more nervous) as well as his biological facts (exclusion from the art scene, shortage of money, aging, which according to some accounts he had related to painfully, probably also declining health and problems with his studio school).
The tension described above is admittedly perceptible in this painting, yet unlike the two other self-portraits that were completed in the same year, here Laikmaa has dressed himself in white. This creates a number of dramatic colour contrasts – situated on a pitch-black background, his white suit jacket especially comes to the fore, and in turn his red tie and the sketchily outlined suit jacket breast pocket, from which a reddish handkerchief glows, come to the fore from the white background. As usual, Laikmaa pays a great deal of attention to bold contours. Nothing blends in or is blurred, instead everything ends with concrete boundaries. Compared to the other two self-portraits, there is a greater focus here on the face. It is situated in a patch of light and painted in great detail, paying attention to his luxuriant beard, the reddish line of his mouth as well as his almost non-existent hair. The contradiction that is born between the facial expression that speaks of psychological tension, exclusion and rejection, and the bold and dramatic colour contrasts, contours and details, comes across as being very unconventional. Is the artist who painted this self-portrait documenting his downhearted condition here? Or the opposite: him being above his conditions? Does he want to affirm his strength with this work, or admit his defeat? Does he want to make contact with us? Or not? If he does not, then why did he paint this work in the first place? If he does, then why doesn’t he look us in the eye?