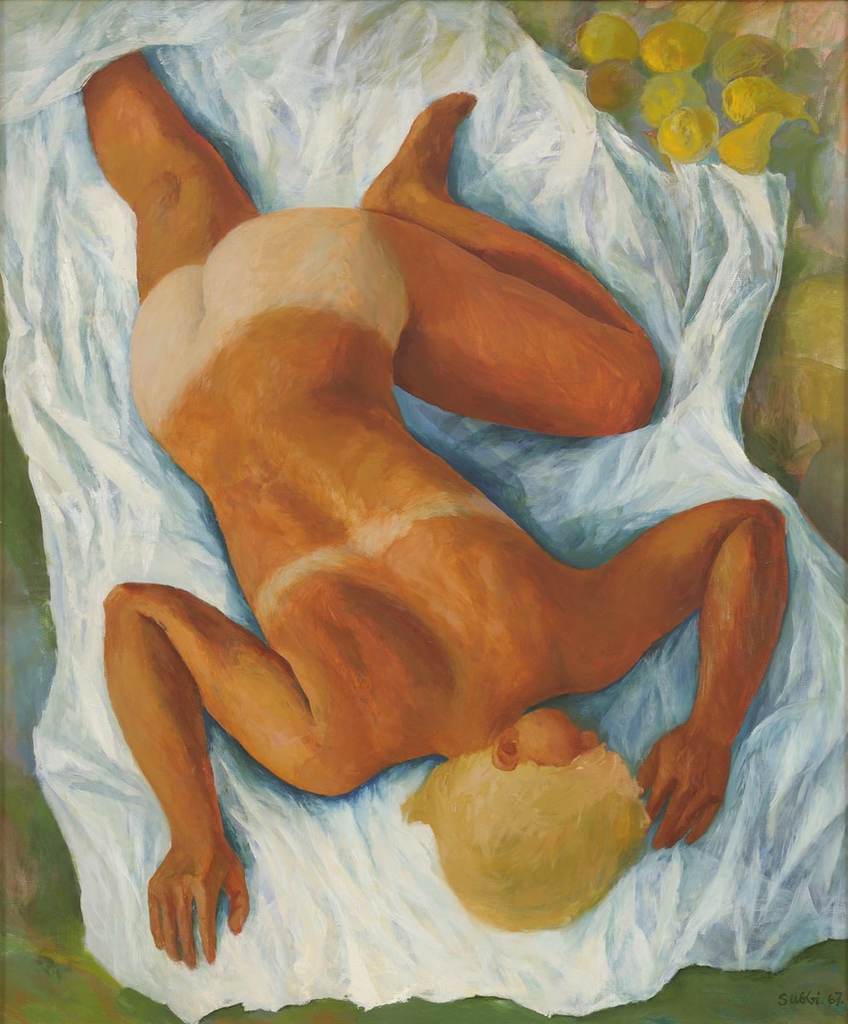 The year 1967 was the most fruitful year for Olev Subbi, as he completed a total of seventeen paintings. Although by his own reckoning, Subbi had been painting professionally for only five years by that time, he had finished about ten nudes. He had formed the approach that can also be seen in this painting: the nude figure is anonymous, psychological and social distinctions are of no significance, and the naked body has been laid out for observation without resistance. The figures in Subbi’s nudes are always, whether lying down, standing or sitting, in significant spatial contexts among meaningful objects, which are stressed in the titles of the works of art. In the same year, Subbi made Nude Under a Tree and Nude in an Armchair, in which the models are in specific spatial circumstances in which the armchair and the reddish trunk of the tree are as important to the paintings as the nude figures are. Parallels could be drawn between this painting and the work White Cloth (also 1967), which is rather unique in Subbi’s oeuvre as it focusses on a lifeless physical object, studying its geometric rhythms and chiaroscuro.

Nude on White Cloth was probably completed in the second half of 1967 and was displayed for the first time in Subbi’s first personal exhibition in January 1969 in the art museum in Kadriorg Palace, Tallinn. According to the artist’s notes, he used a glazing technique, which made paint layers semi-transparent. We can also notice the impact of the general art scene of the 1960s as the forms are still somewhat coarse and angular and the various painted surfaces seem to stand clearly apart, rather than melting into each other. This “aftertaste” of the “rough style” is, however, barely noticeable, as Subbi was already moving away from it. The position of the model is somewhat surprising. Previously, the artist had favoured nudes who looked directly at the viewer or listlessly past the viewer at a slight angle; in this picture, though, the model has pressed her face into the cloth, desiring no contact with the viewer, according to the artist’s will, so we only notice the slightly comical tan lines on her body. Subbi’s interest in the tan lines was, however, not of a comical nature (as Subbi never made obvious jokes in his paintings), but arose out of interest in the differences in shades.