The exhibition “Symphony of Colours. Classical Estonian Painting from Enn Kunila’s Collection” is being held within the framework of the Saaremaa Opera Festival in cooperation with Eesti Kontsert from 2 July to 2 August 2015.

Konrad Mägi was in Saaremaa in 1913 and 1914 – his health was poor and needed treatment in a sanatorium that provided mud baths. Furthermore, after living abroad for years, he was no longer able to draw inspiration from Estonia since “after being in Paris, everything seems boring”. For this reason and due to his sensitive disposition, Mägi needed new experiences and so he went with a friend to Saaremaa for the first time in June of 1913. As his good friend and later biographer Rudolf Paris has noted, Mägi shortly admitted that his health was better and even his painting was progressing – he had already completed some ten studies. When autumn arrived, he took these studies along to Viljandi, where he continued to paint them until the summer of 1914 arrived and Mägi returned to Saaremaa. The greater portion of Mägi’s works with Saaremaa themes was presumably completed during that second summer. They are “filled with freshness of colour and power”. When Mägi displayed his Saaremaa series at an exhibition, the result was general elation.

In the early 1920’s, however, Mägi travelled to Italy, staying primarily in Rome, Venice and the island of Capri. He felt happy here as well and sent postcards to his Estonian homeland expressing his elation: “I have the kind of feeling as if I had arrived home after being away for many years. Even though the living conditions here are very uncomfortable, I still feel excellent and the will to live and to do something more – here I feel that life has meaning,” is what he wrote to his friends and family back home. Mägi started painting energetically and his Italian adventure that lasted almost three-quarters of a year also marks the beginning of a new creative period for him. “There still seems to be something very much southern in my nature. All of Rome is such that it seems more and more interesting with each passing day. In any case, I don’t want to leave so easily from this country,” wrote Mägi.

Ants Laikmaa was in Italy a few years before Mägi went to Saaremaa. While travelling under extremely tight economic conditions, Laikmaa managed to somehow miraculously scrape by and even to travel to the island of Capri, where he decided to extend a trip planned to last one and a half days into a stay of nearly one and a half years. Laikmaa completed numerous portraits and landscape views on the island, which in the opinion of some scholars form the best part of Laikmaa’s body of creative work. For instance, Villem Raam writes: “Laikmaa’s creative work now achieves its most masterful, powerfully colourful and most densely compositional expression.” Raam highlights the vividness of the colours that had started to fade in the works Laikmaa had painted in the meantime, and also points out the rhythmicality he achieved in depicting mountainous landscapes.

Just after arriving on Capri for the first time, Laikmaa wrote to Friedebert Tuglas: “An agreeable place, likeable people, inexpensive, beautiful and peaceful life. Lots of motifs for painting.” He is elated by the impressive nature and exotic beauty of the island. “Yes, Capri, this island for artists, it has far surpassed all my beautiful expectations!” he wrote. “I initially came here for one day and became captivated by Capri for 3 days, but if I hadn’t stayed here for four days and a week, oh how little of an inkling I would have had of it to take with me. What, then, can three or four months and a year here mean! Nature cannot be sucked dry of its beauty anywhere. The longer you remain near it, observing it and delving into it, it opens up ever more new garners, depths and secrets.”

Incidentally, Laikmaa appears to have had a special affinity for cliffs. “Paradise! Clear blue skies constantly, water around the island the likes of which I have never seen before: darker and at the same time clearer azure blue into which gigantic cliffs reflect themselves,” he wrote in one passage, for instance. Laikmaa wrote to Tuglas, however, during the first weeks he spent on Capri: “I have several “my cliffs” in Finland – here I don’t have even one yet that I can call my own.” It is possible that the cliff with the tomb of Emperor Tiberius and the water surrounding it became that “my cliff”, which Laikmaa has depicted in one of the works at this exhibition.

­­Amandus Adamson was the only Estonian artist to visit Italy regularly. His first trip there took place in 1897 already but during the following decades, he either restored his health there or worked on his sculptures in Carrara marble and with other means. In addition to all this, he also met his wife in Italy and it is there that their daughter was born. One of Adamson’s last paintings is on display at this exhibition. He painted it after a nostalgic trip to places where he had been in his youth.

Johannes Võerahansu did not depict Saaremaa’s nature so much as he depicted people and their traditional living conditions. Võerahansu focused on the lifestyle of the islanders especially in the 1930’s, often painting their work and activities. Eerik Haamer was an islander, unlike Võerahansu, who was born in the interior on the mainland. Haamer often painted the people and nature of Ruhnu Island in the 1930’s, but he also depicted Saaremaa. His Vaika maastik (Vaika Landscape), completed in 1945, has a tragic background: the work was painted in Sweden, where Haamer escaped to expressly by way of the Vaika islands. This last view of his Estonian homeland was so important for Haamer that he painted precisely the same motif several times more over the course of the subsequent decades. The very first version is on display at the exhibition.

In addition to these paintings, two large-format figurative paintings by Johannes Greenberg on theatrical themes are also on display.

The curator of the exhibition Eero Epner 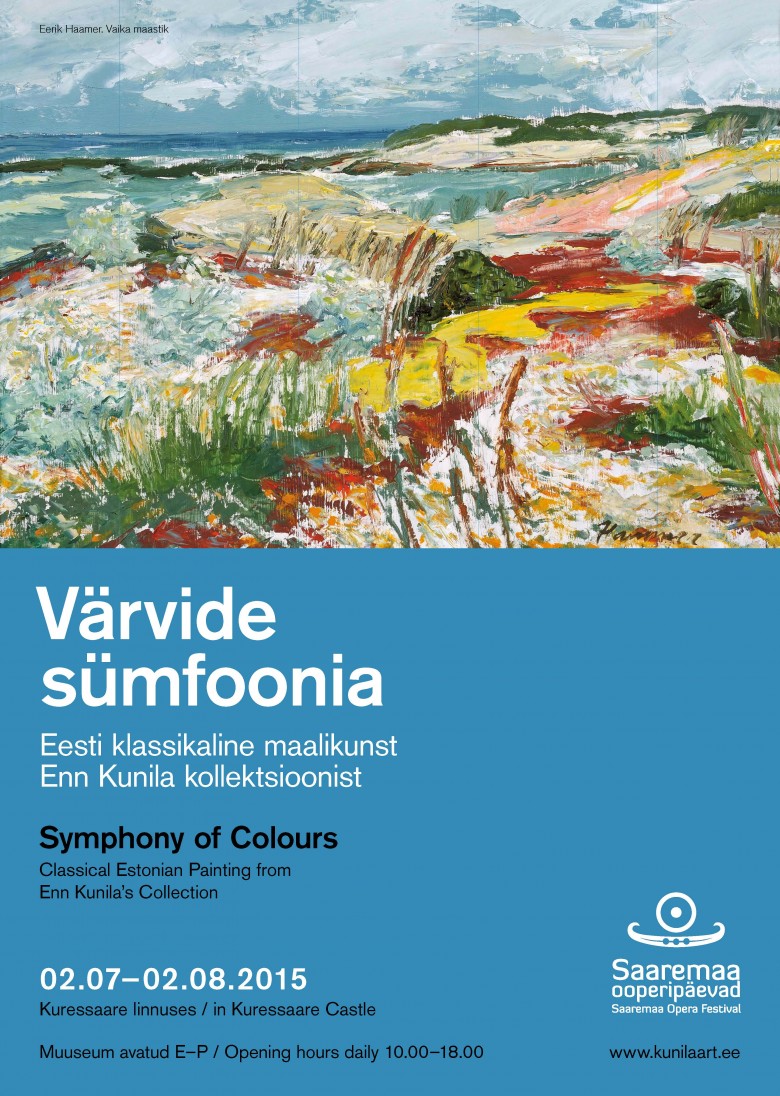