The exhibition Wanderings of Estonian Artists. A Selection of Paintings from Enn Kunila’s Collection will be at the Long House, Hiiumaa Museum on 11 June – 30 July.

All of the paintings at this exhibition are tied in one way or another to the wanderings of artists – both at home and abroad. The impulse for this exhibition was the play Elagu, mis põletab (Long Live Whatever Burns) performed at the museum, which is about the life of Estonian artists in Paris in the early 20th century – in the city to which artists, writers and performers from around the world wanted to travel, and where they wanted to live and create.

A larger exhibition on the same theme was at the Hiiumaa Museum in 2007. The art historian Liis Pählapuu wrote in the catalogue Igatsus ja kohalejõudmine (Yearning and Arrival) accompanying the exhibition about the travels of Estonian artists as follows:

All of the artists represented here at this small exhibition have travelled and they are all united by the wish to seek and find: some seek inspiration, others are in search of themselves, some seek fresh impressions, others are simply on vacation. Yet all their travels have proceeded differently.

Some really do undertake a journey by ship or train: many artists have travelled to Europe’s big cities and experienced pulsating energy in them, or hiked in groups in places with exotic natural scenery. From such trips, they brought back with them pictures of landscapes associated with a specific place, which often form something like a certain kind of travelogue. First and foremost, however, trips provided new emotions that were reflected in the sketches that were made on the spot, in paintings completed in their home studios, or sometimes quite unexpectedly and decades later.

The first generation of wanderers – Ants Laikmaa, Konrad Mägi, Nikolai Triik – have seemingly become artists in the course of their journeys. Laikmaa travelled about Europe for years, gathered impressions, painted, and finally arrived at Capri, where he started working ecstatically. Life seemed easier there, Laikmaa was happy there, and many of his more important works are completed there in a year’s time. Similarly, Konrad Mägi also rushed about constantly looking for something new, but everywhere and always, he still painted himself and his inner quests for a new language of painting. Nikolai Triik, however, went to Europe in order to use the experiences he had gained entirely to develop the art scene in his Estonian homeland. He bore the enthusiasm typical of his generation for open minds and fresh air inherent to the Noor-Eesti movement.

As time passes, “travel landscapes” have ever more broad-based meanings in the creative work of artists. A particular trip often becomes merely an emotional background that is developed further in their creative work as they travel in the world, and thus “landscapes” emerge that are independent of the motif of any particular place. Ado Vabbe, who in his youth was brimming with the cheerful exhilaration of travel, later withdrew into himself and his former travels take on altogether new symbolic meanings in his creative work that are often comprehensible to himself alone.

The other side of travel is always arrival back home, when artists look anew at the familiar trails of their home neighbourhood. The experience of seeing the Other and the foreign helps them to notice the distinctiveness and beauty of their own country. They are full of zeal to develop the local art scene. Many of those first wanderers laid the foundations for the continuing development and general values of the art scene. Thus Ants Laikmaa and his studio school, Nikolai Triik and the Noor-Eesti movement, Konrad Mägi and the Pallas school, Ado Vabbe and Siuru, etc. belong together in Estonian cultural history. This is precisely where the reasons can be seen for why the subsequent generation had such close ties to their homeland: Estonian culture (and along with it taking interest in traditional folk culture as well) had ascended to a firmer footing supported by traditional values that had also emerged throughout Europe. Thus Oskar Kallis is inspired by folk culture borne by his teacher Laikmaa’s eagerness, and creates truly brilliant interpretations of it over the course of his brief life. His feverish train journey to the Crimea just before his death, however, turns out to be the last of his few trips abroad…

Even though Erik Haamer, Richard Uutmaa and Johannes Võerahansu would also have had many opportunities to travel and look around, these trips often remained only cursory contacts in their case. Haamer, Uutmaa and Võerahansu all particularly loved domestic landscapes, their direct experience and the conveyance of their experiences. In their case, arriving at “recognition” did not require the bohemian life of a world traveller.

Everyone was able to make their own choices. All possibilities appeared to be open. This certainly seemed to be so for the Pallas students Lepo Mikko, Elmar Kits and Endel Kõks as well. They graduated from school and everything was just beginning. They planned to travel through Europe, first and foremost to Paris, which their teachers had talked so much about. The year 1939 that arrived and the subsequent events of the war, however, scattered circles of friends and the plans they had made together. Some travelled abroad as refugees, others stayed behind in their homeland. An era arrived where one had to cope with the needs of one’s searching spirit in an atmosphere of limitations and closure, and to keep oneself developing in spite of everything. Two spaces for action went into effect for many artists – an open and controlled world of creative work, and alongside that a closed one. The possibility for freedom, the chance for unlimited journeys was found in that closed side. 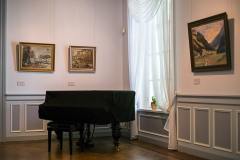 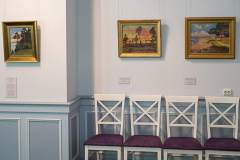 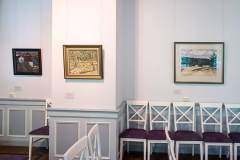 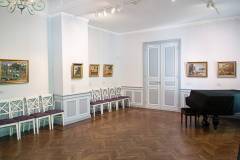